PETALING JAYA: Harimau Malaya manager Kim Pan Gon wants his men to accept defeat to Vietnam and shift their focus to the final Group B action against Singapore at the Bukit Jalil National Stadium next Tuesday.

He stressed, it is useless to continue mourning the controversial defeat when Malaysia has an important match and the chance to advance to the semi-finals of the AFF Cup is still there if they manage to beat Singapore.

“This defeat taught the team a useful lesson and we still have one more match against Singapore at home.

“I also want to apologize to the fans in Malaysia for failing to make you proud of us.

“We will go home and correct any mistakes before the match against Singapore, we need to hunt for victory in that meeting to ensure Malaysia qualify for the next stage,” he said after the match in Hanoi yesterday.

In the action at the My Dinh National Stadium, both teams finished the match with 10 players, but the penalty kick given by referee from Japan, Ryuji Sato to Vietnam in the second half sparked controversy.

In the Group B action, badi Vietnam continued to haunt Malaysia when they lost 3-0 to the squad coached by Park Hang-seo pyang which was also marred by a controversial penalty kick.

Japanese referee Ryuji Sato also handed out two red cards in the match, with the home side’s Nguyen Van Toan the first recipient for a hard tackle on Dominic Tan in the 32nd minute. 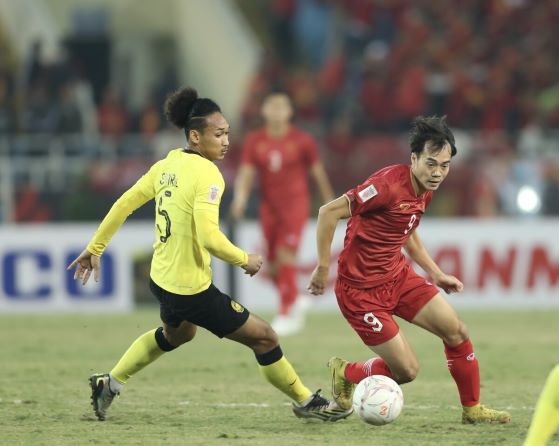 However, the red card sent to Azam Azmi Murad in the second half of the game sparked controversy when the player was said to have reacted by fouling Vietnam’s left back, Doan Van Hau, while off the field, prompting Sato to make the decisive decision.

The coach from South Korea said, he will make a full analysis of the match and his players need to get up ahead of the action with Singapore later.

Elaborating on the performance of the Harimau Malaya line-up, he was satisfied with the performance displayed and that his players had done as directed by the coaching line.

When asked about his decision to send out Dominic Tan and Shahrul Nazeem in the second half of the match, he explained that Dominic was shown a yellow card, while Shahrul complained of feeling uncomfortable and to avoid injury he was taken out.